“It all started 9 years ago. I began agonising over why I had so many plastic shopping bags in my house, so I decided there and then to quit using them!” explodes Hayley McLellan with enthusiasm as we ordered our coffees.

I had arranged to meet her at the Two Oceans Aquarium at the Waterfront in Cape Town, to learn about her journey with the Rethink the Bag campaign which she initiated in 2010. 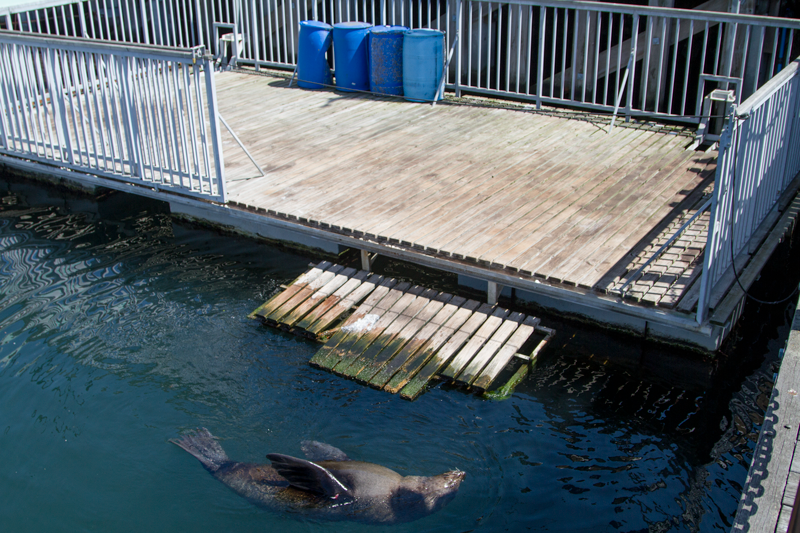 When entangled seals haul out onto this platform to rest, Aquarium staff attend to the dangerous task of releasing the animal from its trappings. © David Peter Harris

From where we were sitting we had a great view of Cape Town’s harbour, and the seal platform where disentanglement procedures are conducted on wild seals that become entangled in marine debris, specifically fishing line and box band strapping. When entangled seals haul out onto this platform to rest, Aquarium staff attend to the dangerous task of releasing the animal from its trappings. Hayley begins, “I have worked with animal care and behaviour since 1989. In 2009 I joined this Aquarium to take care of the African penguins and in 2010 I decided to develop a project out of my personal no- plastic shopping bag commitment. A year later I communicated my passion to our Director. He believed in the cause so much so that he committed to adopting it as an official Two Oceans Aquarium environmental campaign and the project was officially launched in March 2011.” The Aquarium staff joined her pledge to not bring plastic shopping bags into the building, rather choosing up-cycled reusable bags, often sourced from local community upliftment projects. Almost five years later, Rethink The Bag is an established project that aims to raise consciousness regarding the waste-stream which individuals produce, and promote education about the importance of banning the use of plastic shopping bags. In 2013 Hayley was appointed to a newly created position of Environmental Campaigner.

Why say NO to plastic shopping bags?

As Hayley says in the documentary Baggage, “South Africans use approximately 8 billion plastic shopping bags annually and, if not responsibly disposed of, these can float down our rivers or travel down storm water drains on their way to the sea. The wind is another efficient transporter, even from landfill sites. In an anaerobic landfill (where there is no oxygen), plastic bags can remain for up to 1000 years. In 2004 South Africa introduced a “controversial” levy to curb plastic shopping bag consumption. Statistics show that plastic bag use has, however, not decreased and it’s unclear what has happened to the money raised by the levy. Between 2004 and 2014 over R1.2 billion was raised, but only R200 million was spent on environmental issues (Look here for an analysis on  the plastic bag levy in South Africa). Plastic which reaches the ocean is often caught up in one of the five major ocean currents, or gyres, and exists in the oceans for many, many years. Being naturally curious, animals will investigate what comes their way and very often fall prey to a variety of plastic items which are mistaken for food. As a result, many hundreds of species of sea life consume non-biodegradable plastic material.”

Through the Rethink the Bag campaign, successful strategic partnerships have been formed with groups that share Hayley’s commitment to a healthy environment. As a result quite a few milestones have been reached. In July 2014, Greyton became the first town in the Western Cape – and the whole of South Africa – to commit to the process of banning single-use plastic bags in their community, setting the emblematic date of 3 July International bag-free day to activate the movement. Greyton also hosts an annual Trash to Treasure Festival, a celebration of a trash site turned into a treasure and fun site for all, adults and children alike. In October 2015 Port Elizabeth claimed the first plastic shopping bag free high school, D.F. Malherbe. As a result of engagement initiated by Hayley, Spar Western Cape launched their own unique plastic packaging reduction campaign called “It’s our plastic, it’s our problem”, which also endorses the awareness and education objectives of Rethink The Bag.

How do we reduce our plastic “addiction”?

According to Hayley, an optimal plastic reduction strategy involves a holistic approach that addresses all variables and offers positive alternatives, acknowledgement and reinforcement.

“It’s counterproductive to put people in a situation where they have no education and no choice. Educating about the consequences of living as a ‘take-make-waste’ society begins the necessary process of behavioural change. If people do not know what impact their living is having, then why would they consider changing their ways? Further to that, showing communities how to live differently to benefit both people and nature is essential as it becomes easier when we know the how. We are, essentially, also nature and nature does not waste.”

Hayley McLellan started Rethink the Bag in 2010. In March 2011, it was launched as an initiative of the Two Ocean Aquarium ©David Peter Harris

“Of course my plea to everyone is to stop using plastic bags and sign the petition! This is my personal campaign and it fuels my passion for the environment. However, there is a long list of little actions that anyone can take and it’s important to commit to whatever fits with your lifestyle. This way you’ll set yourself up for success and feel empowered as little actions really do mount up. It’s not only about the choices you make but, importantly, your attitude. The one thing we all have absolute command over is our attitude; our attitude determines our words and our actions, so make yours count.”

Before we parted, Hayley shared a last bit with me. “The mantra to climb Kilimanjaro is two words, ‘Pole Pole’ which means ‘slowly slowly’. If you want to create a sustainable journey, you want to go ‘Pole Pole’ – each person making a difference doing what they can. Just not too slowly as the earth is crying out for our immediate care…” Banning single-use plastic shopping bags is currently a worldwide movement with a growing list of countries committing to this action. Most recent is Mauritius who joined the crusade on 1 January 2016.

I often walk on the beach, picking up plastic trash and wondering how it got there; I am sure I am not the only one coming home with lots of trash collected in public places. So, join RTB’s pledge, sign this petition and let your actions count. Follow Rethink the Bag on their Facebook page. 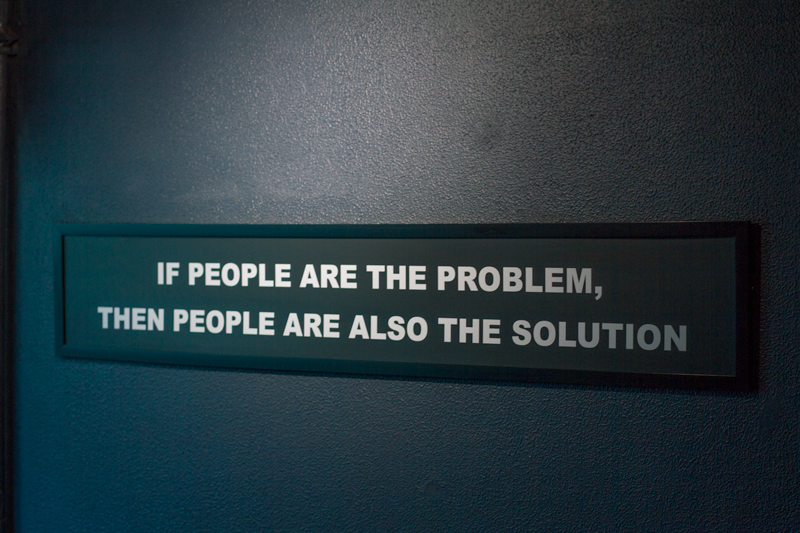 “The earth is crying out for our immediate care”, we all agree with Hayley. Two Oceans Aquarium, Cape Town ©David Peter Harris

(This copy has been written as a collaboration between Hayley and myself, for which I am very grateful.)

8 thoughts on “Change Makers on Eco Atlas | Rethink the Bag”