Home » How I reduced my use of nappies radically

When I fell pregnant the second time the only thing that dampened the flurry of excited butterflies in my belly was the thought of having to deal with the daily onslaught of pooey nappies again. Little did I know then that I wouldn’t have to! My second born was successfully having his number two on the loo from the tender age of one month old and besides the first few weeks, while newborns get into the rhythm of their bodies processing their first external food, i.e.breastmilk, my son had a handful of pooey nappies in his entire lifetime and was potty trained and nappy free in the day by 18 months old. And it was all thanks to reading the book The Diaper Free Baby just after he was born.

So this story needs to be shared because it is life changing and revolutionary stuff as people become more and more aware of the negative impacts of disposable nappies.

It is estimated that parents will go through about 4500- 5000 nappies before their child is potty trained. That is pretty astounding, to think of all the babies using nappies in the world right now creating that much waste to landfill (unless of course they land up in the ocean or elsewhere), plus the thought of human waste (poo) going to landfill too! And then those nappies don’t biodegrade so they are all around for pretty much the next 500-1000 years. So your nappies are still there in a landfill somewhere….weird thought hey? Added to that are the chemicals used in the nappies to hold the wee, not great to have that so close to all that pure pure skin. And then of course the resources needed to make the nappies, package them and transport them absolutely everywhere. It’s a no brainer that they don’t score high in an earth conscious lifestyle, but score very high on convenience and functionality and we have to be real about those factors in our life too. For the sake of my sanity I used a disposable nappy at night because a dry baby and a well rested mom was very conducive to a happy, healthy home.

Reusable cloth nappies are of course a great alternative to disposables.

They are not going to clog up the landfills, they are usually made of natural fibres which will biodegrade at the end of their life cycle and they are far far more cost effective especially as they can be passed down to siblings and friends giving their re-use value real weight. It also means no chemicals against your baby’s skin. There are loads of really good cloth nappies on the market now, have a look at these on Faithful to Nature for some examples. Cloth nappies can be tricky for those experiencing drought, as we did when my son was born, but because he was not creating pooey nappies it became far more viable. 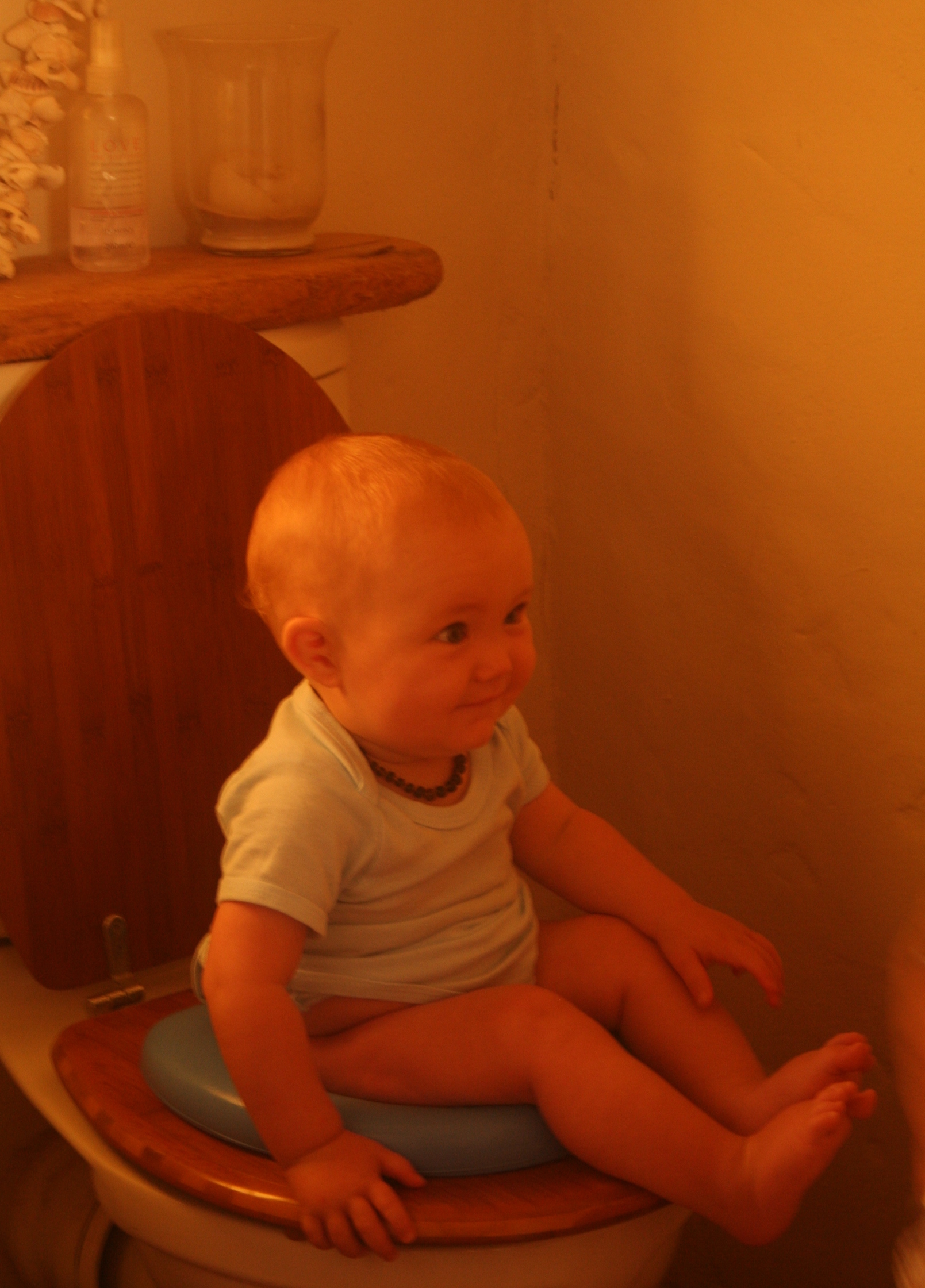 So how did we do it? The basic principle behind the Diaper Free Baby book is that from birth babies will attempt to communicate when they want to eliminate, but if we don’t respond to their communication they will give up and make do with sitting in their own wee and poo (realistically who would want to, but what choice do they have?). So the light bulb moment is really that simple, if we respond when they communicate their need to go by taking them to the loo or potty, they will continue to communicate and you will be able to catch all the poos and the wees  too if you are able (I wasn’t able to, my hands were full with a toddler and a newborn, but there are those who go completely nappy free!) In the book it is called Elimination Communication or EC and obviously it is not verbal, but when you are looking out for it it becomes very obvious, a grimace, a grunt, a downward pull of the lips, every baby will have their own unique way of communicating to you. It’s also really helpful to be aware of the obvious times they would need to go, like when they have just woken up or finished a feed take them to the loo or potty. And of course, close bonding by wearing your baby in a sling really helps with the communication. The other key element is to create a sound that becomes a code for eliminating so that whenever you go to the loo or potty with your baby you make a specific sound or word so that they start associating that as a reminder that now it is fine to eliminate.

Take a newborn to the loo I hear you asking incredulously? Yes, that’s what I did!

I would sit backwards on the loo facing the cistern and hold him with his back against my chest so that he felt held and safe and then hold him on the back of his thighs so that his knees flopped over my hands and he could eliminate freely straight into the loo. No mess, no fuss! Revolutionary I tell you, to not be bending over a stinky, pooey nappy and trying to clean it all off that pure skin. I’ll never forget that moment when I realised he really had it, I was in Fruit & Veg, carrying him in a sling on my chest, he must have been 3 months old or less and he communicated that he needed to go with a grunt and a grimace. There was no toilet for customers then, so a staff member led me through the back warehouse round pallets over-ripe fruit to the staff loo. And there, at age 3 months, he had a very satisfying elimination in a warehouse toilet in a neighbouring town and there I was bursting with pride! And also very glad that I didn’t have to deal with a stinky nappy while shopping for my fruit and veg!

When they are old enough to sit they can have one of those baby toilet seats that fit on top of the loo and sit there all on their own. When it comes to potty training and going nappy free in the day it is a breeze because you already have the communication all waxed and that was why we were able to get rid of the nappies completely at such a young age. It’s really not rocket science, but it is so rewarding and if you think about it this is how we always would have done it before the invention of nappies, we’ve just forgotten how. But babies haven’t, they remember just fine!

4 thoughts on “How I reduced my use of nappies radically”