Home » How to Build an Eco-Friendly B&B 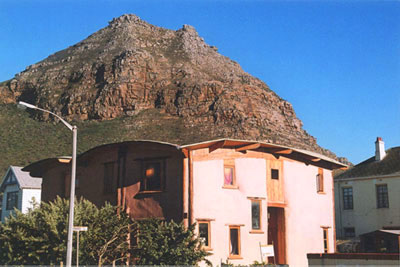 These days, an increasing number of my life decisions just don’t feel complete unless I’ve taken into account the factors upstream and downstream that relate that decision back to the earth and our place on it. And when building our eco-friendly cob house, as well as completing the portion that now runs as an organic B&B, my partner Carey and I did our best to choose sustainable options in as many areas as possible. But without compromising on this, there are still plenty of ways of saving costs too!

Most obviously in our case, the building material itself didn’t cost the earth – literally. ‘Cob’ is not something you can buy off the shelf from your local hardware store; it’s an ad hoc mixture of sand and clay that varies in its proportions according to what’s available locally and even what the weather is like on the day you’re building (hot dry ‘bergwind’ days needed a lot more moisture in the mix, for example!). And the clay isn’t the high-end stuff used for making regular baked bricks: it’s best if it’s got a decent amount of sandy grains in it as you want it to bond nicely with the sand. Most of our sand came from our foundation digging rather than being pulled out of sensitive dune systems; and the ‘clay’ was reclaimed and recycled from the municipal landfill site nearby, where other builders were dumping it (as “useless” material!)

We searched around for the straw – some of it being shipped in wholesale from an out of town farmer, at a fraction of the cost of the animal feed places. And our gum poles, which form such a distinctive feature of our house, were being cleared as aliens. They were treated by Somerset Timbers (in Somerset West) who were the only wood-treatment plant we could find that would use an organic/eco-friendly treatment process that was acceptable for building standards. We relied somewhat on our excellent structural engineer, who erred on the side of caution in all things – too many well-meant natural buildings have crumbled through lack of care or knowledge in either construction or maintenance.

Sure, our costs crept up somewhat again, after the huge savings we’d made on the wall materials, because of the length of time our labourers needed for a building process that wasn’t conventional – though we still saved compared to regular building methods. And the time taken in itself meant we gave men steady work for longer rather than wasting our money on bricks. And if we come back to the all-important question of the costs to the earth, it’s clear that the energy saving from building in cob, not only in production but in the ongoing heating and cooling savings for the house, are well worth it. Of course, cob is not the only natural building method out there, and you can compare the costs with straw bale, timber frame, adobe, sandbags, to name a few of the more popular options. The main problem we face at the moment in South Africa, though, is that these options, while often traditional building methods here, are not understood enough by financial institutions to make financing of alternative building technology straightforward. Given our housing shortage, that’s a great pity.

But have no fear, if you’re rather looking to refurbish or renovate an existing building, there are still plenty of options for going green, more of which I will share about in future columns!

Simric grew up alongside the green movement in the UK but has lived in South Africa since 1996. That year, when working for an environmental NGO, he discovered natural building technologies, in particular cob. With his partner Carey he co-built the first modern cob house on a suburban street in a South African city; and now co-manages it as an organic B&B, in Muizenberg, Cape Town.

Simric has written and spoken both poetry and prose on a range of topics, often with a holistic/ sustainability theme but with a positive and uplifting perspective. He is also an accomplished teacher in the holistic Waldorf/Steiner system of creative education, and he runs conscious/green day tours of the Cape Town region.

The Cobhouse on Eco Atlas

2 thoughts on “How to Build an Eco-Friendly B&B”